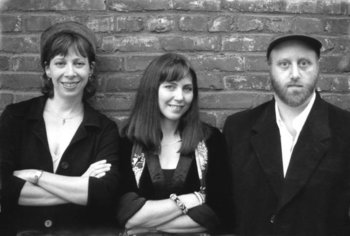 Uncle Bonsai is a quirky, irreverent contemporary folk trio from Seattle, Washington. The original members were acoustic guitarist/vocalist Andrew Ratshin and vocalists Arni Adler and Ashley O'Keefe, who was replaced in 2007 by singer/songwriter Patrice O'Neill of the Mel Cooleys. The band has been recording and performing since 1981, with a hiatus from '89-'98.

Though perhaps best known for their cheerfully cynical, often vindictive comedic songs such as "Suzy", "Boys Want Sex in the Morning", and "Cheerleaders on Drugs", much of their music tackles serious and even somber subjects with tearjerking artistry. They also produced a Concept Album titled Doug in 2000, in collaboration with the Mel Cooleys.

Their latest album, The Family Feast: The Study of the Human Condition, First World Problems, and the Lasting Physiological and Psychological Effects of Eating Our Young, is available on iTunes.

Don't Put These Tropes in Your Mouth:

Tropes Appearing in the Doug Cycle: