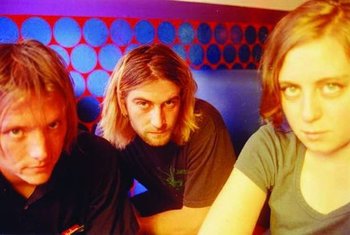 The band during their final year: L to R - Vern Rumsey, Justin Trosper, and Sara Lund

In the world of Post-Hardcore, there's no doubt about that you'll hear the name Unwound. And with good reason.

Unwound was a Post-Hardcore band founded in Tumwater and Olympia, Washington. While never garnering mainstream success, they were highly regarded in the post-hardcore scene due to their bizarre and abstract sound, their fierce DIY ethic, and their endless touring (even going as far as to allow "all ages" shows).

They started off as a normal project with a strange sound with their debut Fake Train all the way to New Plastic Ideas and got progressively more experimental with later albums such as Repetition and Challenge for a Civilized Society. But the album that truly cemented Unwound's diverse sound was their eighth and final release: Leaves Turn Inside You, a double disc album featuring an incorporation of Post-Rock into their sound, and was met with acclaim and praise for it's sound and existential and surreal lyrics.

Shortly after the release of the album, Unwound disbanded on April 1st, 2002 to the shock of fans, especially to those who thought they were joking and not serious (due to it being on April Fools and the fact early band shirts had the phrase "unwound 1991-2091"). The reasons of the band's break up have never been fully explained but it's been mentioned a couple of times by Sara and Justin that it was over the band's collective alcoholism, relentless touring, the effects of 9/11 on each member, and coupled with the band suffering burn out after Leaves.

Never the less, Unwound's held a big Cult Following to this day, with fans hoping for a reunion that will never come, with only recent reissues by each band member (along with box sets) being released.

TV Tropes on the Chalkboard...