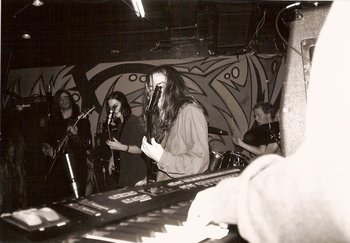 A rare photo of the band performing live.
Advertisement:

Weakling was an influential Black Metal band from San Francisco, California. While they never toured, rarely performed live at all, and only released one album, Dead as Dreams (apparently originally self-released in limited quantities on CD-R and cassette in 1999; given wide release on the tUMULT label in 2000, which is generally considered the album's official release date; (recorded in 1998), their musical output became immensely influential on an entire generation of black metal bands from the United States and elsewhere, including such acts as Wolves in the Throne Room, Krallice, Ash Borer, Fell Voices, Panopticon, Deafheaven, and countless others.

Weakling's primary innovation was to filter the music of Scandinavian Black Metal bands through the lenses of Shoegaze, Post-Rock, and Progressive Rock. The songs were long, with the shortest still exceeding ten minutes in length, and consisted of multiple sections that interlocked to form a coherent whole. The result did not immediately make an impact, and the band was initially noted mostly for containing a future member of The Fucking Champs, but a later reissue of the album brought it more attention, and it was hailed by no less a source than Fenriz of Darkthrone as a masterpiece.

Various members later showed up in other bands such as The Gault, Asunder, Dispirit, The Fucking Champs, The Husbands, and Saros.

This is the track listing used for all CD editions and the band's first self-released cassette. It's not clear if the spelling "Desasters" in the final song title is intentional, because there is conflicting information about this. Some sources have claimed that track 5 was given this spelling in tribute to the Destruction song "Total Desaster", while other sources have claimed that it was a typo (claiming Gossard has indicated this himself, though it is unclear if there is a citation for Gossard confirming this on the web). There is even conflicting information about the many releases of the album, and this is where things really get complicated.

The most commonly known release of the album is a CD edition first released through tUMULT in 2000. According to Discogs, there was a preceding CD-R edition and a preceding cassette edition self-released by the band in 1999. Neither of these earlier editions are present in most other databases (MusicBrainz, etc.), though Discogs actually does have photos of the packaging that confirm these are different from other pressings. Despite the 1999 self-release, most sources list the album's release date as 2000. Both of the self-released editions feature the track listing used on the tUMULt CD (complete with "Desasters" spelling). tUMULt made a second print run of the CD once sometime around 2006-2007 and a third one sometime after 2010, which were mostly the same as the first tUMULt CD apart from some marking information on the CD itself.

Where it really gets complicated is with LP edition and the (possibly second) cassette pressing on German label N:C:U. These are both extremely rare (fans have been begging for a reprint of the LP for at least fifteen years), and different databases have different information about them. Metal Archives and MusicBrainz both have the "Desasters" spelling. Discogs has "Disasters". Discogs has pictures of the LP and N:C:U cassette packaging (the N:C:U cassette is also pictured on Metal Archives), but they are too small to confirm what spelling was used.

In any case, the LP and N:C:U cassette editions both use different track orders, presumably due to the space limitations of their respective media: