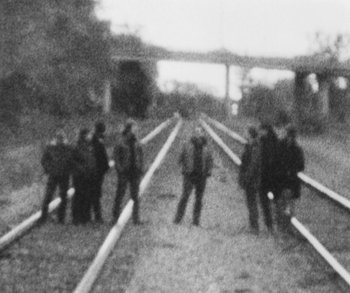 Their music is also incredibly dark.

Godspeed You! Black Emperor released four albums (including a demo album) and an EP from 1994 to 2003 before splitting up, then reforming in 2010 to go on a reunion tour, and released their fifth album in October 2012. A sixth album followed at the end of March 2015, a seventh in September 2017, and an eighth in April 2021.

The group takes its name from a 1976 black-and-white Japanese biker film. The group's debut recording, All Lights Fucked on the Hairy Amp Drooling, was released in 1994 and limited to thirty-three copies on cassette. Due to its rarity, the album became a Missing Episode for almost thirty years, having gone unheard outside the band's circle of friends and Constellation Records (which allegedly still owns a copy of the album). Two tracks of it were uploaded in 2013 and were confirmed to be legitimate, but the full album only surfaced online in 2022, two weeks before it was uploaded to the band's official Bandcamp.

Recorded mostly by Efrim Menuck alone with some help from Mike Moya and Mauro Pezzente, the demo was originally intended to be Menuck's retirement from making music, and bears little resemblance to the band that followed. However, despite Menuck's intentions, the inchoate project gathered local interest and was soon being asked to perform around the Montreal area, and gradually new members joined on and began helping compose new material.

The follow-up (generally considered to be their actual debut album), F♯ A♯ ∞, was released in 1997 on vinyl and 1998 on CD. The two editions are notably different; the CD version is almost twice the length of the vinyl due to added, lengthened, and rearranged movements. It is considered by some a loose Concept Album about the apocalypse.

Godspeed would stick to the minimalist, dissonant style of F♯ A♯ ∞ for their breakthrough and magnum opus Lift Your Skinny Fists Like Antennas to Heaven, a double album with four tracks. This style would be modified for 2002's Yanqui U.X.O., produced by none other than Steve Albini.

After nearly eight years on hiatus, the band reunited for a few shows in 2010, and gradually extended this engagement into tours over the next two years. After more than ten years without releasing new material or announcing plans to, the band started quietly selling their fourth album, 'Allelujah! Don't Bend! Ascend!, at their live shows. It received favourable reviews and was awarded the Polaris Prize. A second new album, 'Asunder, Sweet and Other Distress', was released on March 31, 2015, to positive reviews; "Luciferian Towers" followed on September 22, 2017, also to positive reviews. Their seventh album, G_od's Pee AT STATE'S END!, was released on April 2, 2021, yet again to positive reviews.

Their best-known songs are probably "The Dead Flag Blues," "East Hastings," "Storm," and "09-15-00" due to their use in films and television ("East Hastings" was notably used in 28 Days Later).

It's also worth noting that their music contains a strong political component. They have been repeatedly described in the media as anarchists, although for a long time no one in the group explicitly subscribed to this label; however, Menuck called himself an anarchist in a 2014 interview

, and their 2017 album "Luciferian Towers" ultimately removed any doubt about their political leanings between its accompanying press releases and song titles such as "Bosses Hang" and "Anthem for No State". (The band's politics are hilariously lampshaded in sister project A Silver Mt. Zion's FAQ

). In any case, their music definitely articulates a strong anti-authoritarian and anti-capitalist stance, which is even more explicit in sister band A Silver Mt. Zion (which contains several of the same members). That said, Efrim Menuck has said the band don't consciously try to be political, but simply write songs about the sort of things they talk about with their friends.

As of 2022, most of their discography (excluding the non-album single "Sunshine + Gasoline", and the vinyl bonus material on Yanqui U.X.O.) can be streamed at their Bandcamp

for free (or purchased for download), and an absolutely colossal number of live performances can be streamed and downloaded at the Internet Archive

An upload purporting to be the band's long-coveted demo All Lights Fucked on the Hairy Amp Drooling was posted to a certain infamous Image Board in February 2022. It was not initially clear whether it was genuine, though if it was fake, its creator would've needed to fake elements such as Efrim Menuck's singing voice, the band's rhythmic qualities and guitar tones, and a different portion of the conversation sampled in "Mouths Trapped in Static" (by GY!BE sister project Set Fire to Flames) - not to mention the inclusion of tracks that had been played on Canadian radio and confirmed to be from the demo, as well as much better-quality rips of two tracks that had previously surfaced in 2013. The GY!BE Discord has confirmed it to be legitimate, and on Valentine's Day 2022 the band released the demo on their official Bandcamp page, definitively confirming it to be real.

EPs, singles, and other releases: