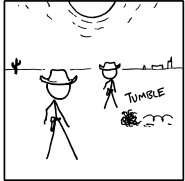 For the best reading experience, play the music from this clip

A popular Stock Parody in the field of soundtracks. A scene depicting cowboys or just a character posing as a badass or facing a potential threat is accompanied by music similar to Ennio Morricone's score for the spaghetti Westerns by Sergio Leone. Usually the theme from The Good, the Bad and the Ugly is quoted ("ayiayiaaaay") or the harmonica theme from Once Upon a Time in the West.

Typical features include, but are not limited to:

Also popular whenever a parody of Clint Eastwood is shown.