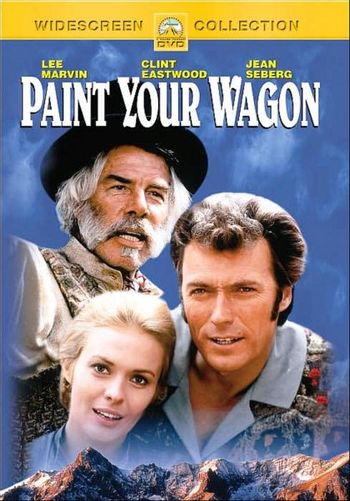 Does this DVD cover, by chance, remind anyone of that film Heaven's Gate?
Advertisement:

This somewhat obscure 1969 movie musical was based on the Broadway musical of the same name by Lerner and Loewe (the authors of Brigadoon and later My Fair Lady), with which it shares a number of characters and songs but not much plot. It was the last film to be directed by Joshua Logan, and the only film produced by Alan Jay Lerner, who wrote the screenplay based on a new story by Paddy Chayefsky.

The story takes place during the California Gold Rush. When a wagon crashes into a ravine, prospector Ben Rumson (Lee Marvin) rescues the surviving occupant (Clint Eastwood). The two form a partnership, and Ben dubs the survivor "Pardner". By the riverside where the wagon crashed, gold is discovered, and a boomtown called "No Name City" promptly crops up.

With the abduction of the prostitutes successful, a brothel is established. Men come from miles around for a lay, and No Name City grows into a thriving town. Presently, a preacher named Parson arrives and decries all the gambling and hooking, claiming that God will make the earth swallow the town. As it happens, Ben and his cohorts dig a maze of tunnels beneath the town to collect the gold dust that falls through the floorboards of the buildings above. It looks like Parson might turn out to be correct...

In answer to the above caption; yes. Roger Ebert compared the two movies too.