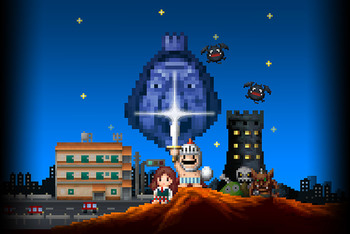 Does this remind you

Meet Yamada-kun. He's the typical Japanese salaryman: a 36-year-old loner who hates his job for a video game company and would rather stay at home to program his own game. When he gets fired by the chairman of the Mega-Corp that owns the society he works for, he at least can pursue his dream of becoming a game designer, but life still looks pretty bad. His only ray of light is Maria-chan, the sweet, innocent schoolgirl who just moved next door... But what do we do with all this? Simple: Yamada will ask us to debug his own game, that is, play it. It starts off as pretty basic, but every time Yamada will implement new functions and items, mostly inspired by his own experiences and the wacky people around him.

— Legend of Brave Yamada (that is both the name of the game itself and Yamada's own game) is a humorous, self-referential title by Onion Games

, available for free (read below) for both iOS and Android. At its core, it is a puzzle game masquerading as an old-school RPG, where you still can find tons of weapons, armor and various items. This game grows more complex the more Yamada (and others) work on it, including a crafting system, randomly generating dungeons, an item shop and much more.

The add-on sequel, Dandy Dungeon II — The Phantom Bride, came out on June 29, 2017. This time the setting is modern-day Tokyo: Yamada will board the Yamanote line

The game ended service on December 20, 2018, with one last update that removed the online capability, thus making the item shop, several dungeons and features unavailable, but keeping the core game intact as long as it is still available on online stores. A Switch version has also been released on June 25, 2019.

I will channel these tropes into my video game: