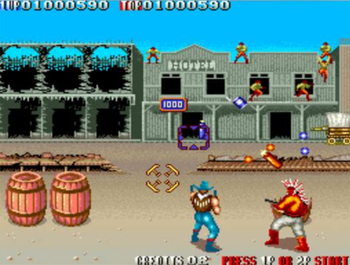 The Bros are in action!
Blood Bros. is a 1990 arcade game developed and published by TAD Corporation in Japan and Europe as a spiritual sequel to Cabal, with almost identical mechanics.
Advertisement:

The rather sparse plot takes place in The Wild West. Two blood brothers, a cowboy and a red Indian, are sent to defeat Big John, an evil outlaw wanted for pillaging the treasure of Dodge City.

Much like in Cabal, your characters are viewed from behind while you use a crosshair to target and shoot at enemies. Both characters have an unlimited ammo gun and limited number of grenades dynamite. A "Foe" gauge at the bottom of the screen depletes as enemies and enemy structures are destroyed, and the level is completed once the gauge is empty.

Unlike Cabal, there is a button for your character to do a dodge roll instead of a trackball. But don't be fooled, this game is still very hard.