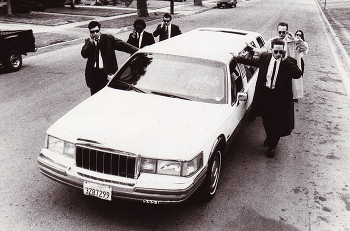 The end of the beginning. Matt, Orlando, Mark, Nathan, Jeff, and Lori from The Diamond in the Fish. 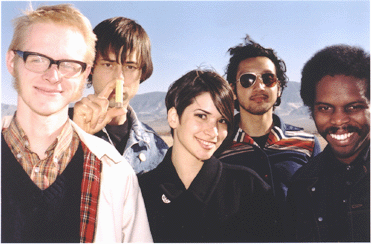 The beginning of the end. Dave, Matt, Mercedes, Erick, and Orlando from Space, Love, & Bullfighting.
Havalina Rail Co. (or just Havalina) was an eclectic folk/jazz/rock band from Long Beach, California. From 1994 to to 2005 they played chaotic shows and recorded five albums, none of which sounded like any of the others, or like anything else in the world. At the end, frontman Matt Wignall spoke of them deconstructing pop music, and (possibly with tongue in cheek) described them as "the last true punk band in America". Either Wignall was joking, or he meant Punk Rock in the Genre Roulette sense (think The Clash's album Sandinista!), not in the Three Chords and the Truth sense.
Advertisement:

Perhaps it would be more informative to give an album-by-album breakdown:

Havalina Rail Co. (1994): A mix of folk, swing, and zydeco, and the only release that wasn't some kind of Concept Album. Easily their best album.

The Diamond in the Fish (1996): A Rock Opera (about the recollections of a retired secret agent) told in Rat Pack-style jazz, as filtered through folk and blues. The band would look back on this one as their least favorite album, but it still has its moments.

Russian Lullabies (1999): A musical experiment. The band read up on Russian folk music so they could mix it with rock music... but they deliberately avoided listening to any Russian music, so the end result was something else entirely. When the album went out of print, the band put the songs up on their website

America (1999): The audio equivalent of a road trip across the USA. HRC threw together a diverse array of regional American music: folk-rock, surf-rock, swamp rock, Latin rock, country, bluegrass, bebop, hip-hop, violin, banjo, steel guitar, and field recordings of bullfrogs were all thrown together with little regard for trifles like "making sense". Probably their best album.

Sometime after the recording of America, half of the band (i.e. three of their four percussionists) departed. An additional guitarist and an organ player were brought in as replacements. While this was hardly the first time their lineup had changed, it was certainly the biggest single change in their history. They commemorated it by changing their name to Havalina.

Space, Love, & Bullfighting (2002): A mix of Latin music, cheesy 60's love songs, and cheesy farfisa-fueled space-pop; thus, the closest thing to a mainstream album that Havalina has ever released. A strong contender for the position of best album.

The album was preceded by two more obscure releases. The first was A Bullfighter's Guide to Space and Love, an EP featuring demo versions of three album tracks, and a few b-sides. The second was Havalina and the Creaky Old Bridge, a Rockumentary focusing on the tour leading up to the release of Space, Love & Bullfighting.

It was after Bullfighting that things started to fall apart worse than usual. Matt Wignall had written a new album, titled Pacific, which he considered (for serious this time) his best work ever, but numerous difficulties delayed the recording. And then in 2005, bassist (and the band's only other constant member) Orlando Greenhill announced his departure. In response, Matt Wignall retired the Havalina name, and the remaining members of the band formed a Spiritual Successor band named Matt Death and the New Intellectuals. The initial plan was for Matt Death to refine and release Pacific, but as of this writing (February 2020) the album still seems to be stuck in limbo.

In 2015, Matt Wignall started a new band, Wargirl, with a few other Havalina alumni (Jeff Suri and Erick Diego Nieto) joining him. Wargirl's moderate success is making the release of Pacific look even less likely than before.

Personnel over the years:

And those are just the actual band members. Who knows how many guest musicians they've had.