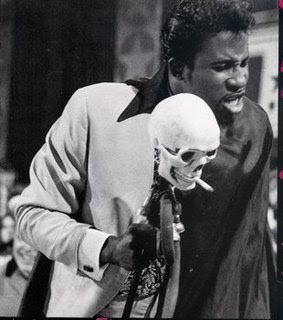 "Y'all know smoking is bad for you, right?"
Advertisement:

Rhythm And Blues musician (1929-2000), noted for his macabre humor and his rather spectacular live shows that included elaborate props and elements of Standup Comedy.

"I Put a Spell on You" is probably his best-known song and has become a standard, but his biggest hit was the 1969 Toilet Humor record "Constipation Blues", which reached #2 on the US Billboard Chart.