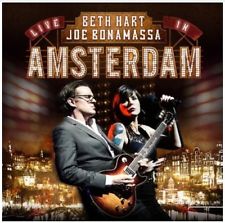 Following two albums of jazz and soul covers, guitarist Joe Bonamassa and singer Beth Hart took to the road in with a "Blues Rock Revue". Live In Amsterdam is a Live Album and Concert Film documenting a 2013 show at the Koninklijk Theater Carré in Amsterdam. The majority of both albums are featured, along with Hart's "Baddest Blues".