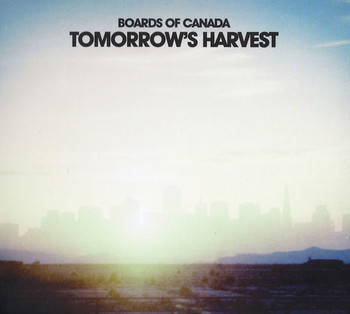 "Jesus was it you indeed...To flirt unkindly with my greed?"
"Tomorrow's Harvest is as strong a return to form as it is stunning an update, with the Scottish duo refining their blend of nostalgic sonics and futuristic sheen."
—Boston Globe
"A lot of this LP does feel like driving by tumbleweeds, rocks, sand and coyote corpses."
—Anthony Fantano, theneedledrop
Advertisement:

Tomorrow's Harvest is the fourth major album by Scottish electronic duo Boards of Canada released on June 5th, 2013, following a lengthy Alternate Reality Game. With a unique sound inspired by film soundtracks of the 70s and 80s, it (along with Geogaddi) demonstrates a more menacing tone than their previous albums. Apart from a few remixes released in 2016 and 2017, and a 2 hour mixtape in 2019, it has been the last original, full-length LP from the brothers.

Reach for the Tropes: