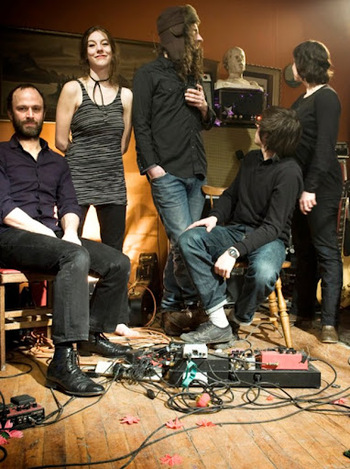 Silver Mt. Zion is the shortened form of the name of a Post-Rock ensemble that has changed its name several times throughout its existence, usually concurrent with lineup changes. The current moniker of the ensemble is Thee Silver Mt. Zion Memorial Orchestra. The base of the name comes from a line in the song "Movie (Never Made)", one of the few vocal pieces on the band's first album.

The group was formed as a spinoff of Godspeed You! Black Emperor, and the two bands still contain many of the same members. Founder Efrim Menuck created the ensemble in an attempt to learn how to score music and become better acquainted with music theory, but ultimately dropped the idea as he preferred to "fumble" rather than to know precisely what he was doing when writing. Regardless, he continued with the project; its first album, released under the name A Silver Mt. Zion, was a response to the death of his dog while he was on tour with Godspeed.

The project has taken on a life of its own, evolving from album to album partially as a result of membership changes. The band's songs have gotten somewhat heavier, to the point where albums like 13 Blues for Thirteen Moons can be considered borderline metal. As Menuck has become more comfortable singing, the largely instrumental nature of the group's early music has also been dropped; all of the songs on the last five albums have had vocals. Menuck's vocals can be a point of contention among fans, as he is not a trained vocalist and does not have a conventionally "pretty" voice; however, his vocals can be highly emotionally expressive, in the tradition of other rock and folk singers such as Bob Dylan and Neil Young. While he is often perceived as the frontman of the ensemble, Menuck is uncomfortable with this role, perhaps owing to his anarchist political stances. While Menuck's voice is most prominent on several of their albums, every member of the band sings, and on "This Is Our Punk-Rock" they were joined by an amateur choir of over a dozen members.

To date, the band has released seven full-length albums and three EPs; they have also contributed a unique song to Song of the Silent Land, a multi-artist sampler by their label, Constellation Records. While they don't have any live albums, they (like Godspeed) allow fans to tape and trade their shows, and almost a hundred are available on the Internet Archive

They also released the track "Iron Bridge to Thunder Bay" on the multi-artist collection Song of the Silent Land (2004, released after Pretty Little Lightning Paw), credited simply as Silver Mt. Zion. Additionally, the entire band contributed to two albums by the late singer-songwriter Vic Chesnutt, North Star Deserter (2007) and At the Cut (2009), on which they essentially served as his backing band on many tracks (alongside Fugazi's Guy Picciotto).