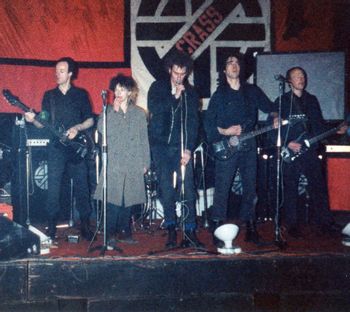 "Be exactly who you want to be, do what you want to do
I am me, and she is she, but you're the only you!"
—"Big A, Little A"
Advertisement:

Formed in 1977 out of Dial House (an open-house community near Epping, Essex), Crass were an English Punk Rock band that promoted anarchy as a political ideology, a resistance movement, and a way of life, and attracted controversy multiple times through the duration of their career - even to the point of causing an international scandal. The band formed when Dial House founder Jeremy Ratter started jamming with then-resident Steven Williams (who took the names of Penny Rimbaud and Steve Ignorant, respectively) after the former saw a gig by The Clash and was inspired by Joe Strummer telling his audience to start their own bands if they thought they could do better. Penny and Steve produced "Do They Owe Us a Living?" and "So What" as a drum and vocal duo, and chose the name Crass as a reference to a line note  "the kids are just crass" in The Rise and Fall of Ziggy Stardust and the Spiders from Mars by David Bowie.

Members of Dial House would fill in the remaining gaps for Crass when needed in the earliest gigs, however these usually ended badly (their first gig saw the band getting the plug pulled three songs into a five song set) or were under-attended. After a disastrous gig at the Roxy Club in London where the band showed up intoxicated and were promptly ejected from the stage, Crass started to take themselves more seriously as a band by refusing to indulge in alcohol or cannabis before shows and displaying their symbolic black military surplus uniforms and logo (a blending of the Christian cross, the Union Jack, the swastika, and the Ouroboros, suggesting the idea that power will eventually destroy itself).

In 1978, Crass released their first album, The Feeding of the 5,000 on the Small Wonder label. The album immediately attracted controversy due to the first track on the album ("Asylum") when the workers at the record pressing plant refused to handle the album due to the blasphemous themes in the track. As a result, Crass released the record with two minutes of silence in its place, titled "The Sound of Free Speech", and formed Crass Records in order to maintain creative control on their albums, as well as preventing Small Wonder from coming under fire. Within the next two years, Crass would release Stations of the Crass and Bloody Revolutions, an album and an EP financed by and in collaboration with Poison Girls, a band which Crass played with regularly, respectively.

Crass would also go on to release several singles and give away a series of flexi discs until 1982, when they released "Penis Envy", an album with more complicated musical arrangements and female vocals addressing feminist issues, attacking marriage and sexual repression; Steve Ignorant was credited as "not on this recording". The album again attracted controversy among the general public thanks to Crass tricking the staff and readers of Loving (a teen romance magazine) into offering a flexi disc of the last track on "Penis Envy" ("Our Wedding") — a parody of an MOR love song, credited under "Creative Recording And Sound Services" with the ad telling readers that the free Crass flexi would make "your wedding day just that bit extra special". Naturally, this didn't go over well once the hoax was discovered. The album was banned by the retailer HMV, and in 1984 copies of the album were seized from the Eastern Bloc record shop by Greater Manchester Police; the shop owners were charged with displaying "obscene articles for publication for gain". The judge ruled against Crass in the ensuing court case, although the decision was overturned by the Court of Appeal.

In 1982, Crass released Christ - The Album, which took a year to record, produce, and mix. Normally, this wouldn't be too huge of an issue, however in the duration of that 365 day period, The Falklands War broke out and ended, causing the political Crass to question their speed and efficiency at making an album, since a good chunk of the songs on the album were about imminent war. As a result, Crass went back to the basics, subverting whatever they could (including slipping copies of their singles into other albums at the pressing plant they were working with), including causing a political scandal in the United States and the United Kingdom.

emerged, supposedly of a phone call overheard (due to crossed lines) with Ronald Reagan and Margaret Thatcher, suggesting that HMS Sheffield was deliberately destroyed in a false flag attack to escalate the Falklands War, and that the United States would launch nuclear bombs over Europe to show the Soviets the United States' resolve in a potential nuclear conflict. Press

in the U.S. and Europe attacked it, thinking that the poor quality audio was a KGB forgery, however a year or so later, the tape was traced back to Crass...somehow, despite the band going out of their way to make sure that they would be anonymous. By this time, tensions in the band were growing, as some advocated a more violent way of spreading their message, while others wished to continue their pacifist methods they'd been using since the group's inception.

In 1984, the pressures of the band working and coexisting, in addition to legal pressures from the Penis Envy controversy and other attempts to prosecute Crass took their toll. The band performed its final gig on 7 July, 1984 for a miner's strike benefit in Aberdare, Wales. On the return trip, their guitarist decided to call it quits; the rest of the band decided to throw in the towel as well, coinciding with their agreement to cease performing in 1984 anyway. Since the breakup of Crass, Steve Ignorant has performed every now and then, which he stated he would cease to do after 2011's "The Last Supper" tour, while Penny Rimbaud has released a few bits of poetry and contributed to other albums since Crass' breakup. Several ex-members of Crass have performed as The Crass Collective and Crass Agenda; as of 2005, the group is now called Last Amendment, and it is unknown when or if they'll perform live again. Despite all of this, Crass is still highly respected to this day, despite breaking up thirty years ago — multiple artists, political activists, and punk bands continue to cite them as a major influence.

"Do they owe us a trope page? Of course they fucking do!":

The following movement, a parody of the hardcore bands they were mocking here, was entitled "The Five Knuckle Shuffle" on the 2011 remaster (all movements were untitled on previous versions; note, however, that the movements are mistitled on the first disc of the remaster, referring to the indices of the original CD issue rather than the indices of the remaster. The titles are mostly correct on the second disc, with the exception of "Burying the Hatchet" being unlisted).