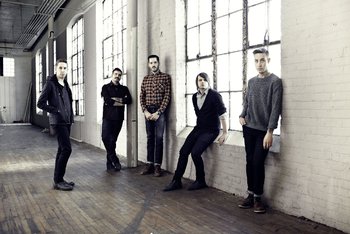 Silverstein is a five-piece post-hardcore band, formed out of Burlington, Ontario in the year 2000. Their band name is a reference to the children's author Shel Silverstein, whose works the band members had grown up reading. Since their formation, the band has released nine studio albums, four EP's, eight singles, 20 music videos, a compilation album and a live DVD/CD. The band is largely a product of the surge of the emo genre through the mid-2000s, taking stylistic influences from the screamo, indie rock, and hardcore punk genres. Their sophomore album Discovering the Waterfront received critical acclaim and launched the band into mainstream popularity, after peaking at No. 34 on the Billboard 200 charts and being nominated for a Juno Award.

Their lineup has largely remained unchanged through the 16 years the band has been together, led by frontman vocalist Shane Told, rhythm guitarist Josh Bradford, bassist Billy Hamilton, and percussionist Paul Koehler. Their current lead guitarist, Paul Marc Rosseau, joined the band in 2012 after the firing of the band's longtime guitarist Neil Boshart.