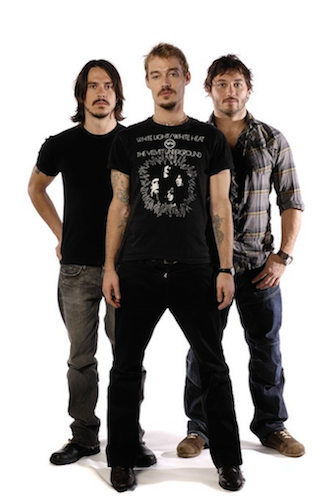 Yes, Daniel, lovely Velvet Underground shirt.
"I don't really know,
How to put on a cool show,
As boring as they come,
Just tell me where to go,
If only I could be as cool as you..."
"Freak"
Advertisement:

Silverchair is an Australian alternative rock band comprised of lead singer/guitarist Daniel Johns, Bass guitarist Chris Joannou, and drummer Ben Gillies. They have been highly successful, winning a record 20 ARIAs (Australian Record Industry Awards). The band first gained notoriety when one of their first songs "Tomorrow", won a local music competition run by television network SBS in 1994. This lead to the band being signed by Murmur Records, a subsidiary of Sony.

Their eventual debut album, Frogstomp, was recorded in a mere nine days, and released in March of 1995 when the band were still in high school, featuring a newly recorded "Tomorrow" and the other singles "Pure Massacre" and "Isreal's Son." The album not only topped the charts in Australia and New Zealand, but hit the top 10 in America which hadn't happened for an Aussie band since INXS. They returned in 1997 for Freakshow, lead by the anthemic single "Freak." Freakshow gave them another #1 at home, as did their third album released in March of 1999, Neon Ballroom. Neon Ballroom is regarded as a Growing the Beard point by some fans, as the band stretched out their alt-rock sound and added some electronic elements.

In 2003, some time after the release of their fourth album, Diorama, the band went on hiatus, members using the break to record on side projects The Dissociatives, The Mess Hall, and Tambalane. The Wave Aid concerts of 2005 saw the band reunite, and album Young Modern was released in 2007. Silverchair joined up with fellow Australian rockers Powderfinger to play the Across the Great Divide tour across Australia and New Zealand, which was to increase awareness of the efforts of Reconcilation Australia to reduce the 17-year gap in life expectancy between Indigenous and non-Indigenous Australians.

They broke up in 2011 while recording their sixth album, although it was officially called an "indefinite hibernation". By that point, Silverchair had sold over 8 million records around the world. They haven't ruled out a reunion at some point, they just need to feel like they have a creative spark again.