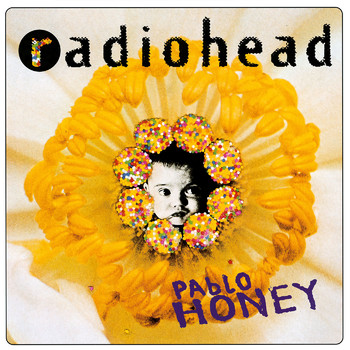 "What the hell am I doing here?"
"You are
The sun and moon
And stars are you
And I could never run away
From you."
— "You"
Advertisement:

Coming out nearly a decade after the band's initial formation as On a Friday in 1985 (owing to the fact that it took 6 years for the band to snag a record deal), it stands as perhaps one of the most conspicuous cases of Early Installment Weirdness by a British alternative band since Depeche Mode put out Speak & Spell. Rather than being a melancholic, experimental effort commenting on sociopersonal decay, economic malaise, and/or political corruption, Pablo Honey is an introspective affair that wears its grunge and alt-rock influences on its sleeve — and across the whole damn shirt for that matter.

Pablo Honey was supported by three singles: "Creep", "Anyone Can Play Guitar", and "Stop Whispering". Of these three, "Creep" acted as a brief Breakthrough Hit for Radiohead, catapulting them into the mainstream and by Thom's admission fueling the sheer egotism the band suffered from while promoting the album.

Here we are, with our troping and confusion:

"And everything I touch...turns to stone."
Feedback

Anyone Can Play Guitar

Anyone Can Play Guitar