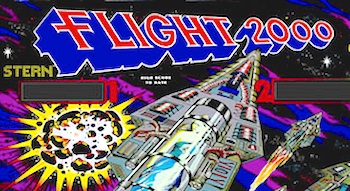 It's not just flight, it's Flight 2000!
"It's a name, followed by a big number!"
— Buford, Phineas and Ferb: Summer Belongs to You!
Advertisement:

By adding a large number on the end of a name, you can imply it is a more advanced/futuristic version of an already existing person/product. By "large number", we generally mean over a thousand, as very few examples are only a hundred times better than version 1. The names tend to be used for specific things in works, and will only sometimes be used to name the work itself (more common if they share the name).

This trope rose to prominence in the lead-up to the 21st century, because in the late 1990's people were excited about the upcoming year 2000. As part of the Information Age boom, many associate the Turn of the Millennium with advances in technology and improved power sources, which would lead to a number of examples overlapping with Annual Title (works that are named based on proximity to the year of release). People began releasing new properties of old works with 2000 as part of the name, to attract audiences to the "new and updated" release. While naming a work 2000 now is passé (since 2000 is in the past), years like 2040 and 3000 continue to collect examples that showcase "futurism" (because they haven't happened yet).

If you're looking for the actual year 2000, that's Turn of the Millennium. This trope is a Sub-Trope to Naming Conventions, and shares some overlap with Annual Title for works released near the year 2000, as well as Title by Number (any work that includes a number in the title). For another area with arbitrary multiples of 1000, see Pinball Scoring.