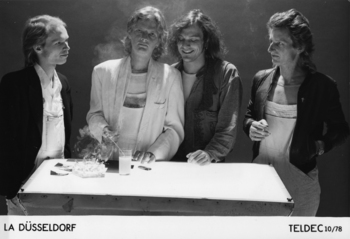 "This
Will be paradise
If we open our heart
If we open our eyes
Come on
And make it paradise
Where the rivers are blue
And the air is clean
And the grass green"
—From "Cha Cha 2000"
Advertisement:

La Düsseldorf was a German rock band active from 1973-1983, formed by Neu! member Klaus Dinger (guitar, keyboards, vocals) with his brother Thomas (percussion, vocals) and Hans Lampe (keyboards, electronics). Like Neu!, they were an influential latter-period part of the German experimental scene, dubbed Krautrock by UK journalists, and they were important in the development of Punk Rock and New Wave Music - David Bowie called them "the soundtrack of The '80s". They were also far more successful than Neu!, selling over a million records in their home country, all with just three albums in four years.

Thomas and Hans were initially gathered by Klaus to expand the Neu! lineup, performing a few small live shows as La Düsseldorf for practice while Michael Rother was busy with Harmonia. This lineup played on side 2 of Neu! '75, with Neu! subsequently breaking up and La Düsseldorf continuing on as its own band from then on. Their sound continued where Neu! '75 left off, adding greater rock guitar, keyboard and vocal presence to the signature Neu! driving, 4-4 rhythm.note This is best known as the "motorik" beat, but Dinger preferred calling it the "Apache" beat. They also all wore white overalls as a uniform, which they immortalized in the song "White Overalls".

Their second album Viva gave them their biggest hit, the instrumental "Rheinita", and their best-known song, "Cha Cha 2000", but the band would fall apart from internal squabbles after the disappointing third album Individuellos. Klaus Dinger would attempt to revive the band, or at least use its name, a few more times in the following years but would routinely be blocked by Hans Lampe. He would also reference it and Neu! with the projects La! Neu? and Japandorf until his death on March 21, 2008.

Album Discographynote Includes only the three official albums, not the subsequent Klaus Dinger projects (which were credited to La Düsseldorf on some releases) mentioned above

"Trope to the future with me":