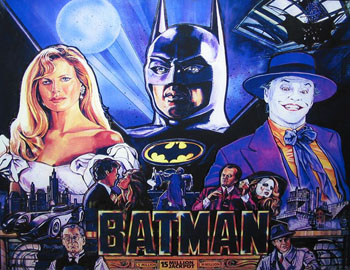 "Wait 'Til They Get a Load of Me!"
Joker: "Oh, there'll be a hot time in the old town tonight."
Advertisement:

Batman is a Physical Pinball Table designed by Joe Kaminkow and Ed Cebula, released by Data East in 1991.

As the game cabinet and backglass indicate, this is a licensed game based on the first Tim Burton movie with Michael Keaton and Jack Nicholson. The game makes no attempt to recreate the movie's plot or events, but simply takes the player on a tour of various locales from the film. Escape to the Batcave with Vicky Vale, climb the scaffolding of the Axis Chemical Factory, and hit both young Jack and old Jack for two million points. Knock down the entrance to the Flugelheim Museum to start multiball, then finish off the Joker with a one-two punch to the eyes and mouth.

Like most other Data East pinball tables at the time, there isn't much to tie the property to the game itself, and the relatively simple ruleset doesn't pose a challenge for skilled players. Still, the license makes it appealing to casual players, and the forgiving gameplay ensures some fun for everyone. Jack Nicholson was gifted with a copy of the game and still has it at his home.