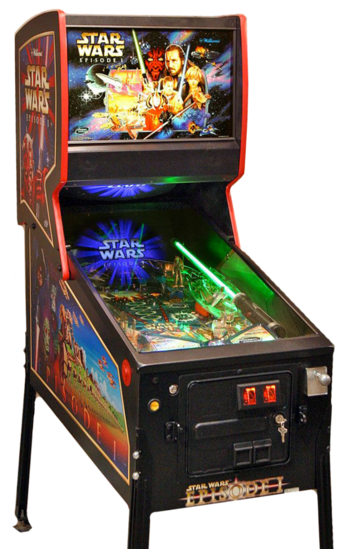 A Long Time Ago, in a Galaxy Far, Far Away...
A new force in pinball has emerged. A game so powerful that it brings you into the action and excitement of Star Wars: Episode I.note See the full thing here.
Advertisement:

Star Wars Episode I is a licensed pinball machine by Williams Electronics based off of The Phantom Menace. Designed by John Popadiuk and released in June 1999, it is notable for being the second and final ill-fated Pinball 2000 game, the first being Revenge from Mars.

The game itself has the player follow the footsteps of Anakin Skywalker and Obi-Wan Kenobi, as he moves up the ranks of the Jedi Order to ultimately become a "Jedi Spirit". Along the way, the player progresses through over a dozen scenes from the movie, interspersed with fights against Darth Maul.

This pinball was the final game Williams made before the company's shareholders decided to close the pinball division, which is noted in the game itself (see Arc Number). The making of the game is profiled in the documentary Tilt: The Battle to Save Pinball.