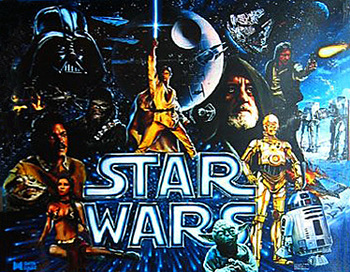 "Use the Force, Luke."
Advertisement:

Star Wars is a Physical Pinball Table designed by John Borg (the first game of his that was ever released) and released by Data East Pinball in 1992.

Based on the original trilogy of Star Wars movies, this pinball revisits key characters and scenes from those films. While the Death Star rotates into position around Yavin, dodge Star Destroyers and enter Hyperspace, then visit Master Yoda and collect a Force award. Enter the Sarlaac pit and collect Jabba's Bounty, then shoot the Death Star and start Tri-Ball for a chance at the Double Jackpot. Go for the ramp to collect more bonuses and awards, but don't get distracted by R2's bouncing and whistling.

General consensus is that Star Wars is a fun and diverse pinball game, though there is too much emphasis on shooting the center ramp. It would eventually become Data East's most popular pinball table, with over 10,000 machines made - if you've seen a Star Wars pinball machine in your time, chances are this is the one.

In December 2012, Stern Pinball (who inherited Data East's pinball assets) released a software update for the game, which made major revisions to the ruleset. The revised software by Chad Hendrickson and other hobbyists fixed bugs, improved game balance, and added various tweaks.