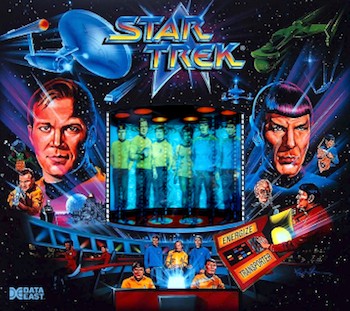 Energize, Mister Scott.
Scotty: "We have full power! Use the transporter!"
Advertisement:

Star Trek is an arcade pinball game by Data East, the second official Trek table. Designed by Ed Cebula and Joe Kaminkow, it was released in 1991 for the 25th anniversary of Star Trek: The Original Series.

Appropriate for a Milestone Celebration pinball, the playfield is filled with iconic props from the television show, such as the Guardian of Forever, the transporter, the Doomsday Machine, and a bank of Dilithium Crystals. Playfield images spotlight key characters and scenes, including Lt. Uhura's evil counterpart, Commander Pike, an armful of Tribbles, and an assortment of Klingons, Andorans, Romulans, and Gorn. But the most eye-catching aspect of this pinball is in the backglass, which shows Captain Kirk leading an Away Team on the transporter pad. At key points during a game, the transporter will activate and beam away the party — and only judicious shots to the moving Master Crystal will re-energize the transporter to bring them back. Original voice clips from James Doohan give player directions, supplemented with sound effects from the TV show.

Star Trek is considered to be one of the better pinball machines from Data East, though cynics will argue that's not saying much. While the rules are fairly simple and won't challenge pinball experts, the gameplay is fast and balanced, and the excellent use of the license adds to the fun.

This game was used as the basis for "Joel Silver: The Pinball", a unique vanity table for the famous Hollywood film producer. The game replaced the Dilithium Crystals with popcorn, and included voice clips from both Silver himself and his friends and coworkers. The game resided at Silver's Warner Bros. reception area for several years.