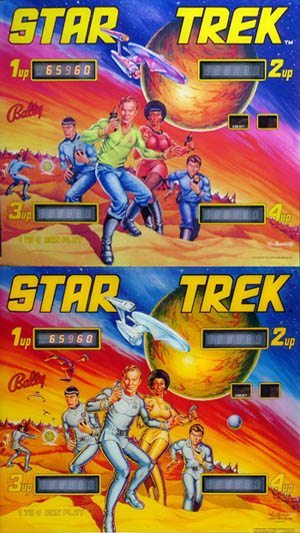 Star Trek (Bally) is a solid state pinball designed by Gary Gayton and produced by Bally in 1979. This was one of Bally's most successful tables, with nearly 17,000 machines manufactured.

It was initially released with artwork based on the original Star Trek television series. However, soon after production began, the decision was made to tie the game to Star Trek: The Motion Picture, which was being released later in the year. This was done by updating the backglass art to show the Enterprise crew in one-color spacesuits, to be a closer match to their Motion Picture uniforms. Furthermore, an unnamed woman appearing on two playfield plastics was redrawn as Ilia instead.

Although the pinball itself plays well, purist Trek fans will bemoan the slapdash use of the license, as only the artwork ties the game to the series. The Enterprise is shown firing a gigantic energy beam from its front saucer, one lane is labeled "Jump to Hyperspace", and the only Spelling Bonus on the entire table is for B-A-L-L-Y. Spock is the only regular character depicted on the playfield, accompanied by a smiling, generic blonde woman in a red jumpsuit (and Ilia in the redecorated version). Even so, it's a popular piece of seventies Trek memorabilia for devoted collectors.

a rethemed version of the game based on the classic episode "Mirror, Mirror." Along with all-new plastics, playfield, and backglass art, Mirror Universe horizontally mirrored the entire playfield, with the shooter lane on the left. It ended up winning "Best of Show" at the 2014 Houston Arcade Amusement Operators Expo.