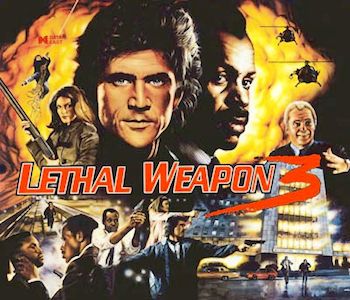 Lethal Weapon 3 is a Licensed Pinball Table from Data East. It was designed by Joe Kaminkow and Ed Cebula, with artwork by Markus Rothkranz. The game was released in June 1992, just a month after the premiere of the third movie.

The game is somewhat misnamed, as it actually incorporates scenes and sound clips from the first three films. Hit the three LW saucers to complete various stunts like the High Fall, Joshua's helicopter, and Murtaugh's exploding toilet, then cap them off with the Super Stunt Spectacular. Alternately, shoot the outer loop to load bullets into the Uzi, then use it to shoot the villains on the display for various bonuses. Cut the correct wire to disarm the bomb, shoot the practice targets for Leo Getz, then loop the right orbit in the Getaway while Crazy Riggs racks up the score to the accompaniment of The Three Stooges. For even faster scoring, start the Lotsaballs multiball mode, then try to score the Speed, Double, and Quadruple Jackpots.

Lethal Weapon 3 went on to become Data East's second-best selling pinball machine, with 10,350 tables made (just short of Star Wars). It's considered by many to be a decent "filler game," a fun and nondemanding table when you want to take your mind off other things. The biggest weakness is in the playfield art, which does not do any of the series' stars any favors.

This game was used as the basis for an "Aaron Spelling" pinball, a gift from his wife and family. It included a Tori Spelling target that said "I love you, Daddy" when hit.