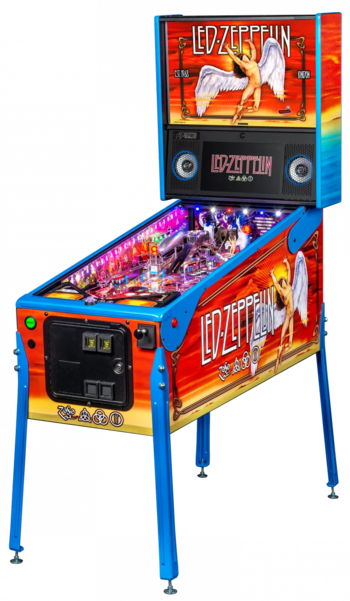 The Limited Edition model.
Led Zeppelin is a physical pinball table by Stern, revealed at the tail end of 2020 before its release began in 2021. Primarily designed by Steve Ritchie, it is unsurprisingly based on the oeuvre of the famous rock band of the same name.
Advertisement:

The crux of the game are the "song modes" – each of the ten songs featured in the game has a mode tied to it, with the specific shots required for progress changing depending on the section currently playing (the chorus, the bridge, and so on). The goal is to score as many gold records as possible through successful shooting, potentially opening the way to one of two Wizard Modes depending on how well the player does. In addition, the player can embark on a total of four tours (all based on actual Led Zeppelin concerts), completing an increasing amount of objectives to start a multiball. Paired with an unusually complex Score Multiplier system and rewards for making combos, these gameplay features all reflect an overarching emphasis on Scoring Points (even more so than other contemporary pinball machines).

The table's physical features include a miniature Icarusnote Based on the logo for Swan Song Records, a label formed by the band that operated between 1974 and 1983 figure that leaps when a nearby target is hit by the ball and a model zeppelin tied to another multiball mode. In addition to the basic "Pro" model that comes with these features, the game also comes in "Premium" and "Limited" versions that add more to the machine. The most significant of these is the Electric Magic device: it raises from under the playfield when triggered, holds a spinner that "charges" it, and can lock a ball upon reaching full charge for an exclusive multiball mode. They also boast an "Expression Lighting System" (96 LEDs inserted into the side of the cabinet, surrounding the playfield with lighting that changes depending on events during a game).