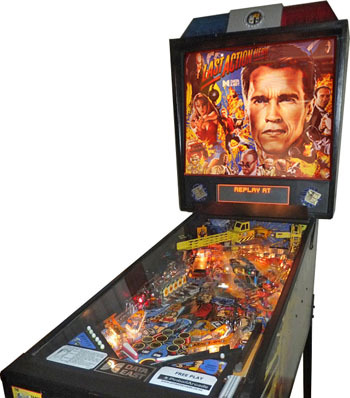 Last Action Hero is a 1993 Licensed Pinball Table from Data East. It was designed by Tim Seckel, Joe Kaminkow, Ed Cebula, and John Borg, with illustrations by Markus Rothkranz.

As one would expect, the game casts players as Jack Slater and Danny Madigan as they go through ten explosive events from the movie. Race to the Roof, Double your Bonus, chase mice with Whiskers the Cat, then Find Benedict and Save Danny to avoid the Big Mistake. Use the Super Crane to move balls around the table, and if you can endure Lt. Dekker's tirades, the quaking cabinet, and the ball-flinging magnets, you can earn your action-hero creds to attend the World Premiere for a six-ball M-ball bonanza accompanied by music from AC/DC, Queensrÿche, and Megadeth.

Although the movie performed poorly at the box office, the pin is highly praised by admirers, who laud its action-packed gameplay, diverse ruleset, and rich audio-visual package. Players who look past its license and Data East heritage have often called it one of the most overlooked and feature-loaded games of The '90s. The most frequent complaint against the game is for its translite, with an unimaginative montage of characters surrounding Arnold Schwarzenegger's oversized head.

Slater: "No sequel for you."