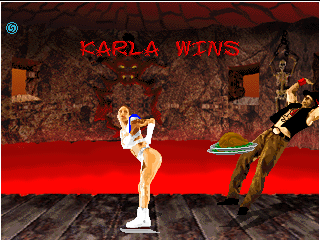 Yes, that is food coming out of her ass... a FARTALITY?* Not shown: endlessly juggling herself and her opponent when the food hits her on the rebound, continually generating more plates of food.
"Everybody shot fire out of their asses. Everybody vomited. It was a free-for-all of weird shit that went into that game. (...) Some of them were amusing. Some of them were just pathetic. It was done half-assed."
— Jack Liddon

One of the many fighting games that tried to copy Mortal Kombat, developed by Data East (specifically, their pinball division, now known as Stern Pinballnote This is not as strange as it might sound; many programmers from The Golden Age of Video Games like Eugene Jarvis and Larry DeMar got their start writing code for solid-state Pinball games.) at the height of the MK craze. It was never actually released, but a mostly complete ROM has been found.

The story began during development of Data East's Back to the Future pinball game, when Data East executive Joe Kaminkow became friends with BTTF producer Bob Gale. Bob subsequently talked to Joe about a script for a story about magic tattoos coming to life and fighting each other; Kaminkow decided to turn the story into a fighting game. He assembled a team of programmers and set out to cash in on the latest fad.

Unfortunately, the game was given less than half of the budget and schedule of most arcade games of the time.

The story revolves around the Ink of Ghize, a multi-colored ink that can come alive if applied as a tattoo. However, unless someone has a certain genetic makeup, they are turned into shambling mutants. Koldan, the only member of the Order of Colors’ Color Guard that can use the ink, decides to Take Over the World with a mutant army. The Order of Colors’ leader, Mullah Abba, recruits nine others to use the Ink, only for Koldan to Mind Control them all. Enter Lyla Blue (played by Slash's then-wife, Renee Hudson), who can control any of the assassins.

Gameplay wise... it's Mortal Kombat, only buggier, less visually appealing, virtually characterless, and with fart and diarrhea moves. The game's main feature was the (supposed) over two thousand finishing moves. Nearly all of them, however, involved things like summoning the DeLorean from Back to the Future, turning someone into a bunless hot dog, or crushing them with a boat. They even had Nudalities.

Although the game was almost finished, it was ultimately cancelled due to negative tester feedback and fear that it would not be able to compete with other titles of the day, such as Killer Instinct. There was a feature about the game in Electronic Gaming Monthly, but despite this, it was largely forgotten. It does have a small cult following, though.