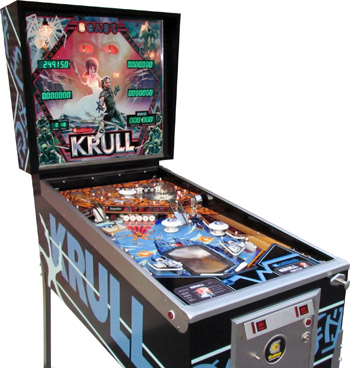 The Glave is nothing but an ancient symbol! It doesn't really exist!
Advertisement:

Krull is an arcade pinball machine from Gottlieb, designed by John Trudeau and illustrated by Keith Parkinson.

Based on the 1983 Cult Classic Science Fantasy movie of the same name, this game casts the player as Prince Colwyn, who must defeat The Beast and his army of Slayers to rescue Princess Lyssa and liberate their world. Venture to the lair of the Crystal Spider in the upper level and knock down the target bank to enable the extra ball, then drop to the middle playfield and defeat the Slayers to enable the Transfer. Hit the center target banks to power up the Glave, then drop down to the lower-level playfield and challenge the Beast in the bowels of the Black Fortress.

Krull's most notable trait is its lower-level playfield; while earlier games like Black Hole and Haunted House had simplified mini tables below the main level, Krull had a second, nearly full-sized playfield inside the cabinet, which the player viewed through a plexiglass lenticular window. Unfortunately, this significantly increased the cost of the game — and when the movie bombed at the box office, management canceled it just before mass-production was to begin.note Fortunately, Gottlieb was able to release the movie's video game adaptation. Only 10 completed prototypes exist, making the game a genuine rarity that's highly sought after by collectors.