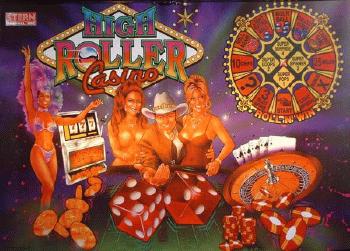 High Roller Casino is a physical pinball table designed by Jon Norris and illustrated by Kevin O'Connor and John Youssi. Released by Stern Pinball in 2001, it stands as Jon Norris' first commercially released pin designed for a company other than Premier Technology, the last table he designed, and the last non-licensed theme table released by any iteration of Stern before they acquired the rights to mass produce Whoa Nellie! Big Juicy Melons in 2014.

The object of the game is to win six casino games: 21 (Blackjack), Craps, Hi-Lo, Poker, Roulette and Slots. The last of these will be the most frequently played of the six games, as playing the slots lights the lock for Slot Machine Multiball, while the bumpers can be reached by shooting an unlit orbit, catching the ball in a magnet at the top of the orbits, which releases the ball on top of the bumpers. The games also award you chips if you win, which increase your bonus and also factor into one of the game's Wizard Modes. If this all seems a bit overwhelming, bear in mind that repeated ramp shots will grant you a Cheat Game, turning your next loss into a big win.

The other main feature of the table is Roll 'N Win, a simple backbox-mounted circular board game that you play by shooting the ramp when Roll 'N Win is lit. The game rolls two dice and you pick one, moving that many spaces, then taking whatever effect is on the space you landed on, which include instant multiball, spotting a casino game, big points, free chips and a mystery award. Each time you complete one circuit of Roll 'N Win, you activate a Super Award, starting with Super Pops, followed by Super Loops, then Super Spinner and finally Super Surprise. Landing on the starting space increases the Super Mode's duration by 50%, so try to do so whenever possible.

High Roller Casino is not often held in high regard by pinheads, but it certainly has its charms. If you can look past the admittedly uninspiring A/V package, the non-brand-name designer and the VERY stop-and-go play, you'll find a great deck for beginning to intermediate players with plenty of goals to aspire for, some fairly amusing quotes and a well-done casino theme that is woefully underused in modern pins.