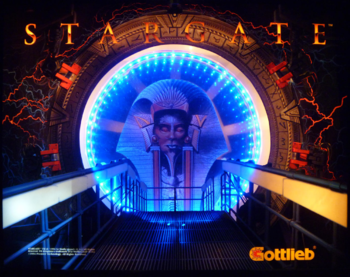 Transport Yourself to Another Dimension

Stargate is a Licensed Pinball Table released in 1995 by Gottlieb (under the Premier label). It was designed by Ray Tanzer and Jon Norris, with artwork by David Moore and Constantino and Jeanine Mitchell.

Based on the 1994 sci-fi action movie starring James Spader and Kurt Russell, this pinball has players recreate the events of the film. Activate the Transporter, trade Quartz for various awards, then make it through the Sandstorm and attack Ra's Temple. Collect the White Pyramids, lead the miners in a rebellion, use the Sarcophagus to raise the dead, then slip under the floating Guardian statues. Levitate the Pyramid and attack the flying Glidercraft, collect the seven Segments to activate the Stargate, then activate the Eye of Ra and prove yourself the master of Abydan.

Among players, Stargate is widely considered Premier's best table and the swan song of Gottlieb's pinball legacy, with many viewing it on par with the best games from any manufacturer. The ruleset is deep and varied, the playfield toys are innovative and clever, and the artwork and design are top-notch. The kickback targets and steep ramps ensure lots of fast action, but a poorly-maintained game with weak flippers will make it more difficult to play. Although the game was originally a modest success with approximately 3,600 units sold, its subsequent vindication keeps demand high among collectors.