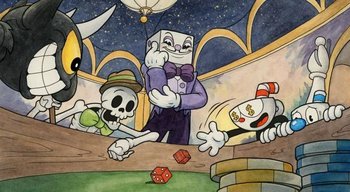 If the characters visit Las Vegas, there will definitely be at least ONE of these, and someone will probably go home broke, either due to strange House Rules or legitimate bad luck, but hey, Viva Las Vegas! If the story takes place in Europe, substitute Monte Carlo for Las Vegas; if in Asia, Macau is the go-to place.

In video games, this is sometimes a Minigame Zone if you can play the games there, but not always. One could also have to bring down The Mafia there too.

For where the gambling isn't actually legal and licenced, see Illegal Gambling Den.