Everything Is Big in Texas 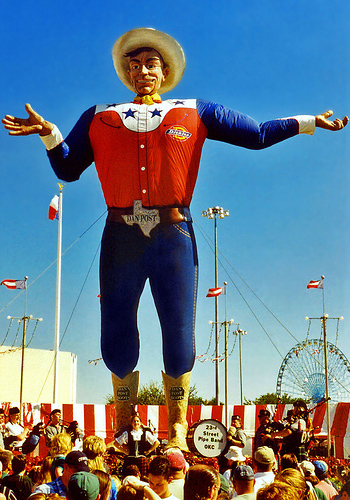 Patron Saint of Corndogs
You have heard the saying that everything is bigger in the Lone Star state, and it is true that the cats are the size of dogs and the dogs are the size of European cars. But Texans themselves are of normal proportions, with normal-sized dreams and loves, who just happen to own cars that are the size of twenty-five European cars.
— The Areas of My Expertise by John Hodgman
Advertisement:

For over a century, Texans have had a reputation for being cheerful, boastful, and loud. They talk about the oil industry (big fields), about herds of cow (they're huge), and American Football (everybody watches football). Texas can seem "bigger" than even the nation it belongs to. If Americans Are Cowboys, Texans definitely are.

Because much of West Texas is an arid, barren stretch of rocky cliffs and deserts (with a few scattered small towns here and there), that has become the classic depiction of Texas, though more realistic works tend to be set in the suburbs of one of Texas' many cities and towns. Characters from the Lone Star State are often portrayed as a mashup between the Deep South and The Wild West. The typical Texan man is a Good Ol' Boy, while his Distaff Counterpart is a Texas Rose (Southern Belle). Positive portrayals will be well-meaning but ignorant, while negative portrayals focus on jingoism and religious fanaticism.

Compare South of the Border, which Texas has a... complicated relationship with. Also check out our Useful Notes page for real life info about the state. This trope is specifically about the stereotypes of the state and its people, which often do not neatly apply to the state's actually diverse geography and population.

The Vastness of Texas Is Referenced In These Works