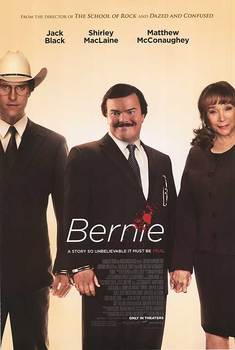 Bernie is a 2011 film that presents the mostly-true story of Bernie Tiede (Jack Black), a funeral director in Carthage, TX, who befriends the local battle-axe, Marjorie Nugent (Shirley Maclaine), at her husband's funeral, becoming her closest confidant and companion, but eventually becoming her verbally abused pet and slave. At his wits' end, he snaps and kills her with a rabbit gun... and then proceeds to keep up appearances, hoping no one will notice the shut-in curmudgeon isn't around much. After being found out, the local DA (Matthew McConaughey) finds it difficult to gain a conviction for a remorseful Bernie who is loved universally by the townspeople and, instead, tries him in a more disinterested county.

The film, directed by Richard Linklater and written by Linklater and Skip Hollandsworth, is peppered heavily with clips of interviews of the real-life inhabitants of Carthage who remember Bernie.

Not to be confused with Albert Dupontel's 1996 film of the same name.