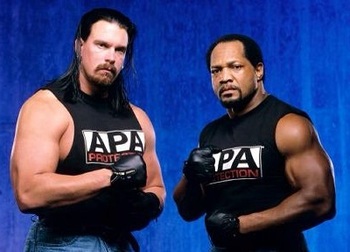 The Acolytes Protection Agency (or simply the APA) was a Professional Wrestling Tag Team who consisted of Bradshaw and Faarooq. They wrestled for WWE between 1998 and 2004.

As single competitors in the WWF, Bradshaw and Faarooq's careers had stalled, with Faarooq having come out as the loser of his feud with The Rock after being expelled from The Nation of Domination, and Bradshaw having gone through two failed gimmicks: Justin "Hawk" Bradshaw, a tough cowboy similar in appearance and character to Stan Hansen who after victories branded his opponents with the letters "JB" in ink rather than being seared into the flesh, and teaming up with his kayfabe cousin Barry Windham to form The New Blackjacks. This changed when they were put in a tag team as the Acolytes, which had them sports occult symbols on their tights and chests, managed initially by The Jackyl until he left the WWF, at which point they went on to become a part of The Undertaker's Ministry of Darkness. As The Acolytes, they won two World Tag Team Championships in 1999, while feuding with X-Pac and Kane and the Hardy Boyz (Matt and Jeff). After renaming themselves the Acolytes Protection Agency in 2000, they adopted the gimmick of bodyguards-for-hire to other wrestlers, and won a third tag team championship in 2001.

In 2002, the brand split also split the duo as the 2002 draft sent Faarooq to SmackDown and Bradshaw to Raw. As a singles competitor, Bradshaw was put in the hardcore division, winning the Hardcore Championship on various occasions. The two reunited as a tag team in Ohio Valley Wrestling and then on SmackDown in 2003. The team again split in 2004 when Simmons was on-screen released by WWE; Bradshaw continued his singles career before retiring in 2009, and the group has made sporadic appearances afterwards, mostly in a non-competing capacity.