Literature / Arc of a Scythe 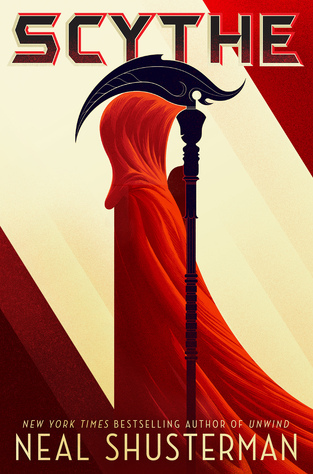 What does humanity do in a perfect world?

Arc of a Scythe is a sci-fi novel series by Neal Shusterman that takes the teen dystopia genre and turns it on its head: rather than showing yet another science fiction Dystopia, the series deconstructs the very idea of a Utopia by taking the most common idea of Utopia and showing the consequences of a truly peaceful, conflict-free world.

In the far future, humanity has successfully eradicated all diseases. There is no war. All governments are under the control of a benevolent AI called the Thunderhead. There is no social or economic inequality, and mankind has even managed to conquer death itself. But with humanity no longer constrained by time, someone has to keep the population under control to avoid overcrowding the world and using up Earth's finite resources. Enter the Scythedom, an order of warriors whose sole purpose is to kill people for the long-term survival of humanity.

The series follows two teenagers, Rowan and Citra, who are chosen to become the apprentices of a high ranking Scythe. As they train for a job that neither of them actually wants, they come to realize that underneath the surface, their perfect world has some very deep flaws. With their every need taken care of by the Thunderhead, humanity has lost its drive to improve and simply does things to avoid boredom rather than out of any enjoyment, while younger generations of Scythes begin developing delusions of godhood and enjoy killing for its own sake. Citra and Rowan must learn the ins and outs of the Scythedom and train to become elite killing machines while also confronting the cracks in their utopia.

There are a total of three installments in the series.