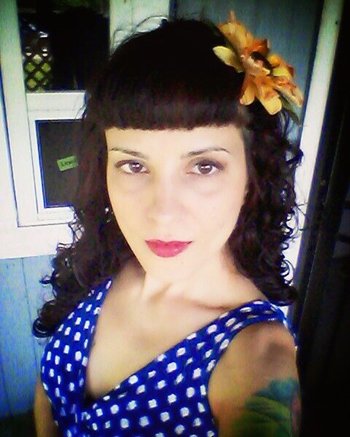 Kira Vincent-Davis (born July 9, 1979) is an American voice actress, noted for her roles in English-language dubs of anime series. She is likely best known as Osaka in the comedy anime Azumanga Daioh, Ruri Hoshino in Martian Successor Nadesico, Quon in RahXephon, Lucy and Nyu in the dark drama/horror anime Elfen Lied, and as Izuna Hatsuse for No Game No Life and Elenore Baker in Madlax. She starred as Misaki, the main character, in Divergence Eve. As you can see, she has a wide vocal range.

She has worked under a number of different names, including "Kira", "Kira Solar", and "Kira Vincent(e)".

. The majority of her work now lies with Funimation, however, her overall career is significantly more limited than it used to be. This was very apparent when she didn't reprise her Star-Making Role of Lucy/Nyu in the Elfen Lied OVA (being replaced with Carli Mosier). However, she seems to be coming back working with Sentai Filmworks, starting with her role as Kanzashi Sarashiki in the second season of Infinite Stratos.