There have been multiple Physical Pinball Tables named Harley Davidson released over the years. 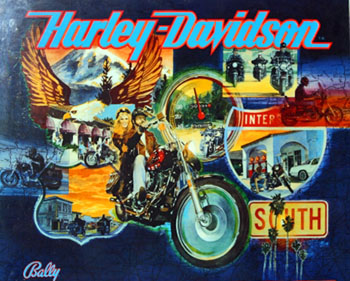 The first Harley Davidson game was released by Williams Electronics (under the "Bally" label) in February 1991. Designed by Barry Oursler based on a concept by artist Mark Sprenger, it was intended to be a low-cost game with broad appeal. There is no overarching objective; instead, the player is simply out to collect a high score, either by advancing from Laconia, NH to Los Angeles and collecting the jackpot, or by spelling HARLEY DAVIDSON to collect assorted bonuses and rewards. The reversed outlanes will surprise rookies, but pinball pros can start multiball and collect the Screamin' Eagle loop.

To keep costs down, Harley Davidson was designed without any expensive playfield toys or backbox gimmicks, giving it a Retraux gameplay style. While pinball die-hards find the game too simple to sustain their interest, it gets more love from casual players and Harley enthusiasts who enjoy its easy-to-learn gameplay and modest difficulty. 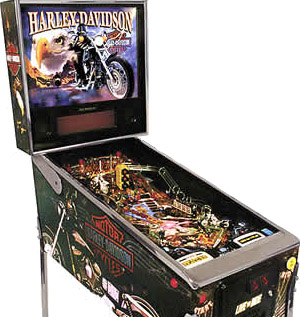 In 1999, Sega Pinball released a new Harley Davidson table, designed by Lonnie Ropp and John Borg. Soon afterward, the company was closed and relaunched as Stern Pinball, and additional games were released under the Stern brand.

As with the Bally table, this Harley Davidson eschewed complex rules for a casual-friendly, easy-to-play game. Once more, the player must travel to sixteen different cities, racking up miles to Milwaukee by hitting various targets. Rush over the ramps quickly to build up speed, hit the stoplights to change the traffic light to red, then hit the playfield Harley to pop a wheelie and start Motorcycle Multiball. Run over pedestrians in the Video Mode, collect patches along the way, and maybe the Mystery Rider will grace you with some extra bonuses.

Many players tend to initially dismiss Stern's Harley Davidson as a simple game that gets by solely on its license, with an overabundance of crowd-pleasing multiballs, jackpots, and extra balls. Those who get deeper find that the difficulty ramps up in later play, with more demanding challenges to advance. Its fans consider it a nice change of pace, a table to unwind with between more intense games.

Biker: "There goes that Mystery Rider, again! I can't seem to catch him!"