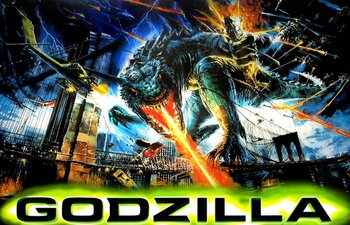 The meanest, greenest game on the street!
Godzilla is a Physical Pinball Table released by Sega Pinball in 1998. Designed by Joe Balcer, it is specifically based on the American remake of Godzilla that came out the same year. Only 510 machines were ever produced.
Advertisement:

The primary goal of the game is to activate five separate multiball modes, each themed around an aspect of the movie: Sonar, Godzilla, Baby Godzilla, Taxi, and Helicopter. Each of these can be stacked, substantially increasing their jackpot values. Naturally, much of the game's strategy involves activating all five simultaneously for the biggest payout possible. This is doubly important because completing them all lights "Save New York", a final multiball where the player finally ends Godzilla's rampage through the city and can earn an incredible amount of points based on how well they scored in the previous multiballs. Other modes include "Score Does Matter" and "Mean Green Machine", both of which involve repeatedly shooting a specific shot for extra points.

Important physical features of the game include a Godzilla head near the back of the table that can spit out a ball when Godzilla Multiball starts, his hands (one of which is atop a ramp, the other of which is above a loop shot), and a shaker motor meant to sell Godzilla's destructive power.

Not to be confused with Godzilla (Stern), which was released in 2021 and is based on the original Showa-era films.