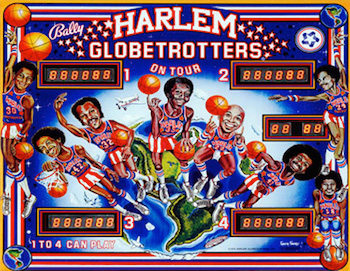 Go ahead, whistle that tune.
Advertisement:

Harlem Globetrotters On Tour is an arcade pinball game designed by Greg Kmiec with art by Greg Freres.

In 1979, the runaway success of their KISS pinball prompted Bally to take another shot at a licensed celebrity game. Instead of going for another edgy rock band, however, Bally went with the family-friendly Harlem Globetrotters, who were a frequent television attraction at the time.

The game is as fun and lighthearted as the Globetrotters; spell GLOBE by knocking the four inline drop targets in the right lane, or take a Fast Break up the left side and into the upper saucer. Hit all five Globetrotters to advance the Slam Dunk Shot, then slam it in for a 50,000-point special, but don't drain the ball between the left double flippers. The rules are simple enough for beginners, but there's enough challenge to keep things interesting for pros.

Not surprisingly, the popularity of the Harlem Globetrotters made this game a big hit, and it remains popular with players today. Over 14,500 Harlem Globetrotters On Tour tables were sold, and even now it still holds the record for the best-selling basketball-themed pinball of all time. Movie buffs will recognize this as the game in the guys' apartment from Three Men and a Baby.