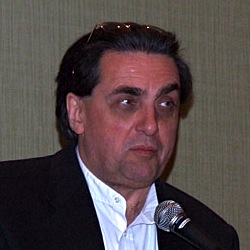 Greg Kmiec is a longtime designer of arcade pinball machines, an industry veteran with more than thirty titles to his credit in a career that spans over two decades.

Raised in Illinois, Kmiec first got hooked on pinball when he started working part-time for Bally/Midway in Chicago while still attending school. He graduated from college with credentials for teaching English, but after a brief stint in the classroom, Kmiec signed on with Bally full time. There, he worked his way through every department, and eventually taught himself enough about pinball to become one of Bally's two full-time designers.

At Bally, Kmiec designed numerous titles, many of which have become icons of the early solid-state years: Wizard!, Capt. Fantastic and The Brown Dirt Cowboy, Power Play, The Six Million Dollar Man, Harlem Globetrotters On Tour, Supersonic, and Xenon. Kmiec remained at Bally for over twenty years, refusing offers from competitors such as Atari and Williams Electronics. He eventually left the field in 1989 after Williams' acquisition of Bally, but eventually returned in 1995, designing Breakshot for Capcom in their short-lived foray into pinballs.

Though retired today, Kmiec remains active attending pinball and gaming conventions. He is a lifelong amateur radio enthusiast, and is a member of the Metro Amateur Radio Club and Chicago ARES . He also served as a volunteer member of the US Coast Guard Auxiliary as a Communications Staff Officer, and can be found on the airwaves with the call sign W9WIZ.