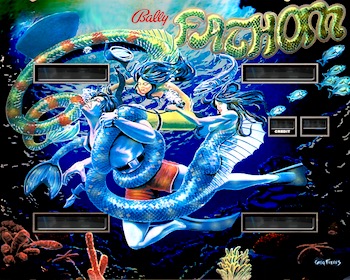 Fathom is a 1980 Physical Pinball Table from Bally, designed by Ward Pemberton and illustrated by Greg Freres.

Somewhere off the coast of Bermuda, three vacationers are enjoying a day scuba diving and exploring the undersea wonders of a tropical beach. After one of the divers stays submerged longer than expected, his friend goes underwater to check up on him — only to quickly fall into trouble from a school of deadly mermaids! While their female companion watches helplessly from above, the player must enter the murky depths and release the captive balls from the Cave Trap and the Lagoon. Spear the drop targets to advance the Blue and Green Bonuses, then keep your cool and knock down the 1-2-3 targets in order to collect the 5x Multiplier before your oxygen runs out...

Fathom is widely regarded as a classic from the early solid-state era and one of the best games from designer Ward Pemberton. The hauntingly ornate artwork is lauded as a sterling example of pinball art, while the original shot layout and challenging gameplay rewards those players skilled enough to master the table. If there is a weakness, it's that some of the sound effects aren't entirely fitting for the theme.

A digital version was once available for The Pinball Arcade until the license for all Williams and Bally tables expired on July 1, 2018.