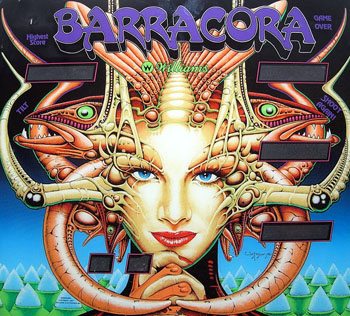 Barracora is a Physical Pinball Table released in 1982 by Williams Electronics. It was designed by Roger Sharpe, Steve Epstein, and Barry Oursler, with artwork by Doug Watson.

When pinball enthusiasts talk about "pinball art", Barracora is a name that frequently surfaces, as the eye-catching merwoman is the first and most memorable aspect of the game. Drawing inspiration from H. R. Giger's works (most notably the painting "Li I"), Doug Watson drew a model's facenote allegedly Brooke Shields morphing into a predatory fish against a landscape of teeth, then dubbed her "Barracuda". Williams' President Mike Stroll loved the artwork but thought the name was too harsh, so the woman (and the game) was quickly rechristened "Barracora".