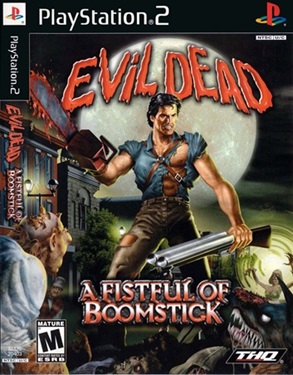 "To Make a Long Story Short, I was sent to Hell and back again. Then again. And again...."
Advertisement:

The second licensed Evil Dead video game from 2003 for the PlayStation 2 and Xbox, developed by VIS Entertainment and published by THQ.

After the Necronomicon is read aloud in a local television program, Deadites are running amok in the small town of Dearborn, Michigan. It's once again up to Ash (Bruce Campbell) to fix things up by killing every sorry-ass deadite in his way and even travelling through time.

The game is based on the game engine of State Of Emergency, with very similar gameplay. Essentially it's a free-roaming beat-em-up with 360 degree aiming gunplay.