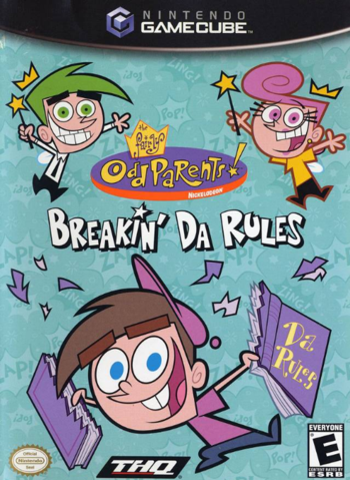 The Fairly Oddparents: Breakin' Da Rules is a licensed platformer developed by Blitz Games, published by THQ and released in 2003.

The game begins with Cosmo and Wanda waking Timmy up and trying to get him out of bed. His parents then announce that they're going away for a "seminar weekend", which means Vicky has come over to babysit. Timmy starts panicking and tells them to "go stall her while I think of something." Cosmo and Wanda tell them that per Da Rules, they can't be seen by anyone but him. Without thinking, Timmy then wishes they didn't have to follow Da Rules, which Cosmo grants. Big mistake. The book ends up in Vicky's hands, giving her Cosmo and Wanda's wish power. Needless to say, they get in big trouble for this, and are sent to Fairy Court to be persecuted by Jorgen Von Strangle. After being found guilty, they are given 49 and a half hours to find every page of Da Rules. If they fail, they lose their fairy license forever. As extra punishment, Jorgen confiscates their wands and replaces them with training wands to do the work with.

The game has eight different "episodes" to play through (not counting the tutorial and Final Boss fight)note "Chinless Blunder", "The Vicky Virus", "A Badge Too Far", "Mini Timmy", "Time Warped", "Crash Landing", "Bad Luck 101", and "A Dog's Life" each based on an episode of the show. You start off in Timmy's room, with three episodes you can play in any order you wish. Once you finally gain access to the bottom floor of the house, you can play those levels in any order you wish.note Sort of. You still have to unlock "A Dog's Life", which is in the kitchen.

Since training wands are not as powerful as regular wands, in the levels themselves, Timmy must collect five wish stars so Cosmo and Wanda have enough power for a wish, and use that wish to get through part of the level. He must do this three times in order to get to the end of the level.