Video Game / The Legend of Korra 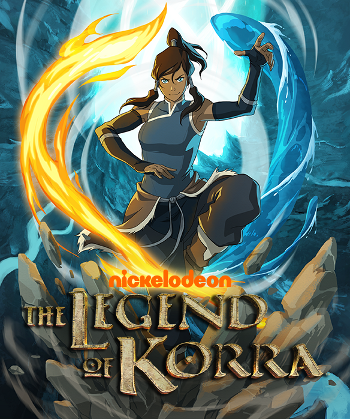 The Legend of Korra is a Beat 'em Up / Hack and Slash game from PlatinumGames for PS3, PS4, Xbox 360, Xbox One and PC. It was released on October 21, 2014 on PSN and Steam, and October 22 that same year on the Xbox Games Marketplace. The game was removed from Steam in December of 2017.

Set between seasons 2 and 3 of the show, you play as Korra trying to regain her abilities after meeting a mysterious villain.

Apart from regular character action gameplay where you fight Equalists and Triple Threat Triad members, the game also has endless runner type sequences where you ride Naga while dodging obstacles and a pro-bending tournament mode.

The plot was conceived by Mike Dimartino and Bryan Konietzko, the co-creators of the show, while the actual script was written by Tim Hedrick, a writer on the show. The game features the original voice cast from the show.

The Legend of Korra: A New Era Begins is an alternate adaptation of the story for Nintendo 3DS.

The Legend of Korra provides examples of: