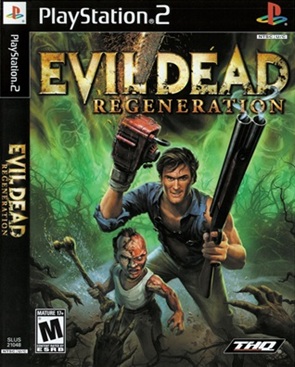 "Listen up, shake and bake. I eat evil for breakfast and danger for dinner. So spread the word: Ash is back in business."
Advertisement:

Evil Dead: Regeneration is an action hack-and-slash game developed by Cranky Pants Games it is also the third and last licensed Evil Dead game published by the late THQ. It was released for the Microsoft Windows, PlayStation 2 and Xbox.It has no relations to the previous two Evil Dead games (Evil Dead: Hail to the King and Evil Dead: A Fistful of Boomstick).

The game takes place in it's own timeline (essentially a What If?), wherein Ash wasn't sucked into the portal that sent him back in time at the end Evil Dead 2. After escaping the cabin, he ended up in Sunny Meadows, a mental asylum for the criminally insane. After everyone was left convinced that he was insane and that all the sickening events that took place in the cabin was his fault. To prove his innocence, a lawyer named Sally helps him out and after finding Professor Knowby's diary, fully believes Ash's story about the deadites. However just as she leaves, one of the asylum's staff members, the insane Obviously Evil psychiatrist Dr. Reinhard reads from the Necronomicon Ex Mortis and accidentally starts another deadite crisis that is much larger in scale compared to the cabin.

Using the chaos to break himself free and regain his possessions, Ash gets two allies along for the ride. The spirit of the late Professor Knowby who assists him from beyond the grave and Sam, a half-deadite comic relief midget (voiced by Ted Raimi) whom is pretty much immortal and despite his buffoonery is actually knowledgeable about the occult, making him valuable to putting a stop to the current crisis.

Ash making himself a flamethrower arm attachment out of some supplies from a fuel storage.

Ash making himself a flamethrower arm attachment out of some supplies from a fuel storage.