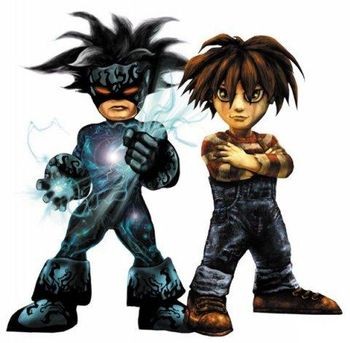 Our hero and his alter ego.
"The oldest legends of Undabed recount that one day a great and terrifying black wave washed over the world and nothing and no one could resist it. A tower rose up out of this enormous tidal wave. The survivors of the catastrophe stopped and observed the tower for a moment. And they knew that this tower would bring them nothing but misfortune and suffering. The Master of the tower sent out his creatures in their thousands... We have found a way into Loren Darith, the Master's tower. Should I fail in my mission, someone will take my place..."
— Lenny note From the trailer. In the game Lenny delivers a slightly different version of this speech.
Advertisement:

This page is about a Video Game. For the trope, see Evil Twin.

Evil Twin: Cyprien's Chronicles is a videogame by In Utero published by Ubisoft and Nacon in 2001. The hero of the story is Cyprien, a boy who grew up in an orphanage after both his parents died on his birthday. Not knowing this, his friends organise a birthday party for him one day. Enraged, Cyprien goes to his bedroom, where his teddy bear Lenny attempts to console him. Cyprien responds that Lenny is only an Imaginary Friend, and condemns him and his world to oblivion. Lenny and Cyprien's friends then disappear and Cyprien is transported to Undabed, a once prosperous world that has been swallowed up by an enormous black wave leaving only a few islands, terrorised by the mysterious Master, whom now holds Lenny captive...

Guided by Wilbur, a talking elephant who travels around on a sling, Cyprien discovers that his make-believe alter ego SuperCyp is real in this world and the islands surviving the black wave are ruled by evil versions of his friends from the orphanage.