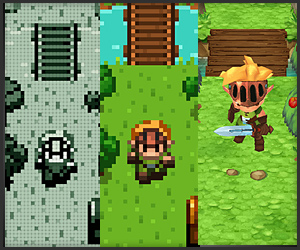 After centuries of peace, an ancient evil has finally resurfaced to threaten the world of Evolandia.
You are one of the few remaining members of the Order of the Dragon Knights, whose purpose is to travel the world to help the needy and fight evil.
Those centuries of peace clearly mean you haven't had a whole lot to do recently, but it looks like business is picking up again!
— Opening Crawl
Advertisement:

.note The original entry can be viewed here

An expanded and refined version was released on April 4th 2013.

You can play the original game here

The sequel, Evoland 2, has been released

The original Evoland contains examples of:

The enchanced version of Evoland contains examples of: