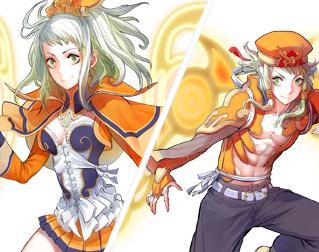 Ranma didn't get the benefit of the automatic change of clothes
Advertisement:

The Espgaluda series is a series of Bullet Hell Shoot-'Em-Ups by CAVE.

Once upon a time, there was a peaceful kingdom named Shinra, ruled by a line of queens with supernatural powers. The current king, Jakou, decides to conduct a number of experiments to induce this power in his children as well as harness it for military purposes. Two of his children, Ageha and Tateha, are rescued from his grasp and taken into hiding by a man named Hiodoshi. Eventually, Jakou's forces track them down...

The game is known for its Ascension Dead Zone (Kakusei Shikai) mechanic (or Ascension/Kakusei for short), in which the player can press a button to slow down enemy bullets, allowing beginners to better enjoy the game, although Ascension can only be used for a limited period of time. Notably, the player's character changes genders when activating Ascension mode, and back when deactivating it. To encourage use of Ascension even in high-level play, the game's scoring system relies on destroying enemies in Ascension mode to collect gold items.

A PlayStation 2 port by Arika was released in 2004. It features an exclusive Arrange Mode based on the game mechanics of ESP Ra.De., the game's Spiritual Predecessor. Another port for Japanese mobile phones, Espgaluda DX, was released in 2005.

It has been three years since the first game, the events of which are known as the "Great Shinra War." The ruling family of another country named Soma decide to salvage Jakou's research and create an organization called the Spirit Society, dedicated to producing more children with psychic powers. One of the products of these experiments, Asagi, flees and joins Ageha and Tateha.

Espgaluda II expands on the gameplay of the original, this time featuring a variant of Ascension known as Ascension Absolute Dead Zone (Kakusei Zesshikai, also known as Zetsushikai or just Zetsu), which can create much higher score multipliers at the cost of generating extra bullets and a harder drain on the player's resources. Bullet patterns have also been made more difficult overall, ensuring that even survival-based players still face a lot of challenge.

A mobile port, Espgaluda II iPhone/Android, was released in 2010, marking the series' international debut, and features a mode that replicates the arcade version as well as an exclusive arrange mode that makes use of touchscreen-focused controls. It would later get an Updated Re-release, Espgaluda II HD for iPad 2, in 2011.

An Xbox 360 port, Espgaluda II Black Label, was released in 2010. Although Japan-only like the arcade version and the previous game, this port has no region coding, enabling it to be played on any region's console. This features an in-depth tutorial that demonstrates the game's (rather complex) mechanics, the arcade original as well as an HD version of it, as well as three Arrange Modes: the titular Black Label arrange, an arrange by Shinobu Yagawa that implements a bullet color cancelling system, and a bonus mode that is unlocked after completing the game once. There are also Novice versions of the base game and Black Label. This version would later be ported to Nintendo Switch in 2021 by Live Wire for all major regions, making it the first time that the console version was officially released outside of Japan.

The Espgaluda series contains examples of: